Our congratulations to Sue Crane for winning the Jack Nunn Series on points.

After good attendance in recent years we did not have many riders this year for Steel Is Real.  However, it was great to see Tim Osborne and Nick Ferris on period bikes and in costume for the evening.  It was also really good to see Nick back on his bike after last year’s accident.  Jamie Richardson-Paige won the Steel Is Real event after a Stewards inspection which confirmed its “metal” status.

Thanks to Emma Angove for doing the start while Sue was off on holiday and Simon Kelly for marshalling the right turn in Little Somerford.  Jeremy Tyzack rode through later claiming he was just out on a ride, but it was wondered if this was just an excuse for getting his timings wrong (by an hour so probably not). We had to use the P Course as there were temporary lights on the normal course, which of course had been removed by the start time but our marshal had already set off for the turn.  The weather had finally broken with it being an overcast and relatively chilly evening.

Another warm humid and not seemingly too breezy from a marshalling perspective evening 10.
Ian Potts start timekeeper, Edwards finish timekeepers, Simon kay push off, Rachael still right turn, Mike gibbons Bus stop left turn, Emma Angove B4069 left turn
Sadly due to holidays the Tandem element of the evening was not supported by any club members but well done to James and Laura for their Tandem to keep the spirit of the event alive

Our thanks to Sue Andrews for start timekeeping, Simon Kay for pushing off, Rachel Still and Jeremy Tyzack for manning the Lyneham RAB.  Also to Emily Slavin for shadowing Sue in preparation for start timekeeping next week.  Normal service was resumed with Mike and Sheila at the finish.  Your Race Secretary wandered around aimlessly not riding having suffered during a 100 mile time trial and not feeling fit to race.

Shock horror, Mike and Sheila take the night off to watch England in the world cup semi final – sadly their time would have been better spent timekeeping and their cowardice was noted as Sue was sent with the message.

The annual suffer challenge of the 50 mile time trial took place on a warm but not scorching evening – about 23C.  Jeremy Tyzack and Ian Potts marshaled, Sue was starter and marshal and of course Mike and Sheila were time keepers.  Your racing secretary discovered his limits pulling out after the first 25 miles following his Sunday 12 hr, his old legs just didn’t have it (mind you that might also have had something to do with fighting to keep Mike Gibbons and then Simon Cox at bay – a fight he lost).  Jamie was going well till he blew spectacularly on the last lap and we had to send out a search party to check he was alright, fortunately he was found riding on, so all was well.  Simon Cox having missed the handicap entry cut off had to ride hard but in the end won the Nixon Cup.  Handicaping being what it is Owen Burgess failed to live up to expectation (as did Jamie) and let Mike Gibbons take the Edwards Handicap Trophy.

Another sunny and hot evening greeted 15 riders for the running of the Sheila Edwards Cup.  With the roadworks gone UC861 was back in use.  The only hazards tonight being a couple of horse riders and a rather a large tractor and trailer, which was well driven but the trailer did not leave much space to squeeze through.  There were the usual comments about handicapping but it isn’t possible to make allowance for long American theme park based holidays on rider’s performance.  There were only 5 pre-entries for the handicap.  Thanks to Jeremy Tyzack for marshaling the turn.

On a sunny and dry evening we had to contend with 2 sets of traffic lights, one before the church / pub turn in Sutton Benger and one (left over from last week with no sign of any actual work) near Christian Malford.  This resulted in several emails as course options were discussed and in the end we raced a variant of UC867 (The P Course) which could be viewed as “The Tadpole” as it had a very short tail and we raced the head 4 times.  The course started at the Spitfire War Memorial and then turned right in Little Sommerford (ably marshalled by Rachael Still), along to the left before the motorway bridge at Dauntsey (manned by Mike Cox) having gone through the “S” bend (again marshalled) before heading to the wooden bus shelter turn (directed by Jeremy Tyzack) and heading back to Little Sommerford for a hard left at the Volunteer.  After 4 laps the course finished just after the bus shelter turn – interestingly despite RideWithGPS giving a course distance of 25.1 mile, my Garmin gave it 24.66 miles which is the biggest discrepancy I have seen between the two.  The competition is a trophy and handicap competition, unfortunately no ladies were racing so the Gerald Cup will not be awarded this year.  Owen Burgess is the winner of both the Hinder Trophy and the Handicap Medal for winning both and riding 2 minutes 37 seconds faster than his previous club ride which confounded the handicapper who had already assumed he would improve, but not by that much.

A blustery and cool evening and the unwelcome sight of traffic lights a mile into the course, with of course no sign of any actual work going on.  This led to using the P course (aka UC867) which runs the normal course in reverse to Somerford and taking a right at the Volunteer pub.  We were innundated with assistance, for which many thanks.  Ian Potts being the start time keeper, with Simon Kay the pusher off, turns were marshalled by Rachael Still who wondered if the tractor was going to squash the Racing Secretary as he overtook it after the turn, Jeremy Tyzack, Emma Angove and Mark Evans.  Andy Cook also turned out to help but went to ride his bike when he saw how many helpers we had.

A dry and warm evening greeted a large field and this week we had several marshals.  Our thanks to Simon Kay, Rachael Still, Andy Cook and Paul Crook.  Also our thanks to Ian Potts for his first outing as a start timekeeper.  If anyone else wants to take up timekeeping please ask, as we do need more people prepared to help.

It was a warm and muggy night which promised reasonable times but these didn’t seem to come.  Our thanks to Simon Kay for pushing off and Andy Cook, with Nick Ferris for marshalling the turn – also to relieving Paul Winchcombe so he could ride.  This season we have been blessed with marshals but this was the first time a rider might have lost his ride.  It would be the intention to draw lots if this situation arises again – system to be worked out.

Please note that these results will change as riders handicap times settle down for those riders with no effective handicap from 2017 (shown by *).  This can cause some dramatic swings in points.  In addition this year I have included riders whose handicaps are based on 1 or 2 rides.  If these riders don’t ride 4 events to set a base level for 2018 their results will be excluded later in the season, as in the past.

Having had some lovely weather over the last few days the evening was cool with strong headwinds – not noticeably so until riders realised they were working hard for little return.  Simon Cox did very well to go under the hour.  Simon Kay pushed off and we were well supported with Sue Crane, Rachael Still, Emma Angove and Jeremy Tyzack all manning the turns for us. 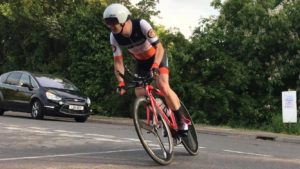 Proof of the headwind for the naysayers

There are two trophies awarded for the series which are based on their best 6 events. One trophy awarded for fastest times and the other based on handicap points.

It would be great to see more youth riders.

On what was a very blustery evening with a strong headwind on the first 5 miles and software reporting 56% of time into a head wind with a 5+ m/s it was not a fast night.  It was good to see Jamie Currie escaping the call of racing at Castle Combe (oh yes there wasn’t a time trial on) and two new riders, Simon Kelly and Gerry Hughes who of course set Personal Bests.  Simon Kay pushed off, Mike Gibbons and Andy Cook marshalled the turns – thank you.

A cold and grey evening saw 5 pairs line up for the annual club 2 Up Handicap event on UC861, as well as a solo rider and a guest 3 up!  Despite comments about the handicapping it was significantly closer this year than last year.  It is worth noting that if Sue had ridden the same time as last year that she would have had a 23:30 and Martin / Mike were splitting the difference on last year’s times making their handicapping a clear challenge. Andy Summers managed to be 42 seconds faster than last year – fortunately he was too out of breath to swear at his partner freewheeling behind him at one point.  Our thanks to Paul Freegard for pushing off and Rachael Still for marshalling the turns. 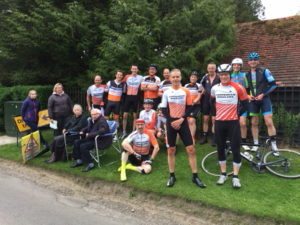 Another cold evening with steady wind saw slightly reduced times but some fierce competition between the 25 minute group and all credit to Paul Freegard who rode to the turn, stopped, marshalled got back on after the last rider and still did a short 25 on his Garmin (time given with blessing of riders on the night – it is after all just for fun).

On a blustery but dry evening 9 hardy souls turned out to climb Lyneham Banks and take the descent at speed, some struggling with the cross wind.  Our thanks to Jeremy Tyzack for pushing off and Paul Freegard for marshalling the RAB, and of course to Sue, Mike and Sheila for time keeping.

Tonight saw sunshine, warmest day of the year so far, a return to UC861 with the disappearance of the roadworks and some interesting results.  For example Paul Freegard beat Paul Winchcombe, which hasn’t happened for a while!  Thanks to Simon Kay, Andy Cook, Andy Summers and Gary Hewitt-Long for marshalling and pushing off.

Jack Nunn – 11 April 2018
Some one said the forecast for today was dry but forgot to mention the heavy overnight rain, the drop in temperature and the wind.  In addition the road works on the Sutton Benger road are still there. So tonight the 10 mile time trial was run on the UC867 aka “P” Course.  Jamie Brosch is to be congratulated on his first time trial and a Personal Best. Also thanks to Sue Crane for marshalling the right hand turn in Somerford.  All please remember, no marshal, no race.  Jack Nunn points will be calculated in due course and posted somewhere on the new website.

A dry, sunny afternoon with light winds saw 3 riders for the medium gear and Paul W giving his TT bike a run out before the Frome 10. Thanks to Mike and Sue for the start, Mike and Sheila for the finish and Paul and Emma for marshalling on the course.  We also got to see Kimberley’s new bike – very smart in purple with matching jacket. 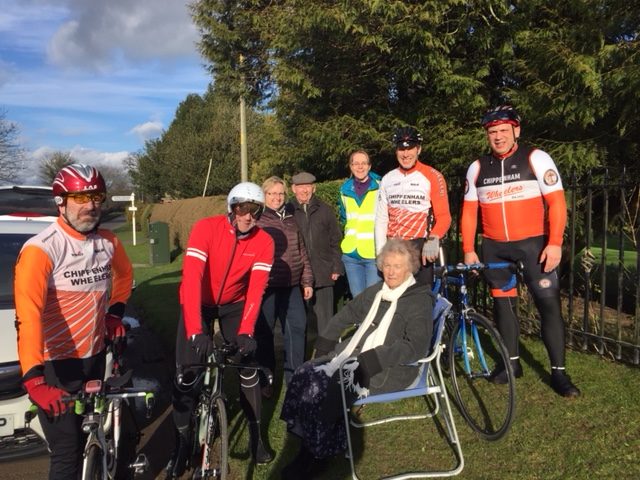