John Else – 50 years a cycling coach

At the end of 2018 John Else achieved a major milestone, marking 50 years as a cycling coach, during which time he trained and advised a great number of cyclists in the Chippenham Wheelers, across the South West region, and beyond.

John started cycling in the 1950s, and over the following decades took part in all types of competitive cycling – road races, time trials, cyclo-cross, track and even roller racing – as well as many years of long-distance audax riding and more relaxed touring, and even some occasional mountain biking.

His coaching career began in 1968, initially in South London and then in Chippenham, where he devoted many hours to coaching individual cyclists and groups of Wheelers – on the bike and at fitness events such as circuit training and turbo sessions.

Through the 1970s and 80s, as Regional Coach and Senior Coach for the British Cycling Federation (BCF, now British Cycling), John and other local coaches organised frequent training days and weekends – before they were called ‘camps’ – for cyclists from across Wiltshire and the surrounding counties.

Of the huge number of cyclists of all disciplines that John worked with during his long coaching career, many achieved great results nationally and internationally, and even included some past and future Tour de France riders.

In early 2019, in recognition of his 50 years of service to cycling, John was awarded Lifetime Fellowship of the Association of British Cycling Coaches, and a medallion was presented to him by Dave Wall, the former chair of the ABCC. 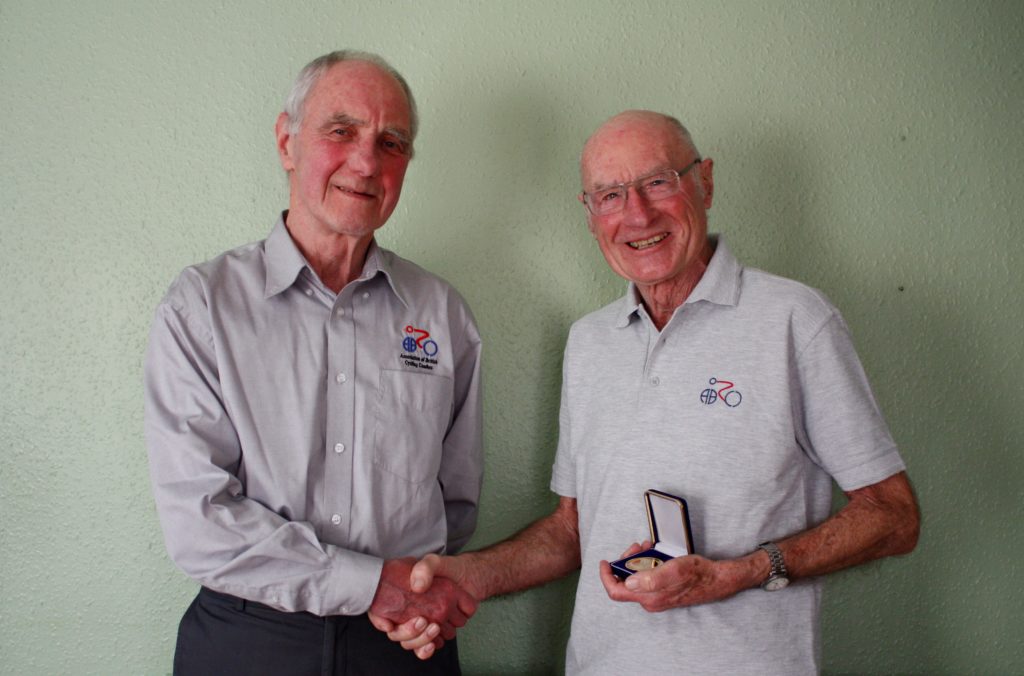 John’s service to the Chippenham Wheelers was marked at the recent club social evening, where chair Andy Cook thanked John for his many decades of work on behalf of the club, and re-presented the ABCC medallion.

John has now retired from coaching duties, but still rides his bike regularly – although he says roller racing is likely to remain a thing of the past.