The Club newsletter for August 2022 with updates on what the club have been upto throughout the month of August. Including updates on Audax rides, Time Trials and Racing.

Our club audax series concluded on 9th July with the Fish and Chip 200km ride out to the coast. Well done to everyone who made it around the course in near perfect conditions, although it was a tad warm climbing up through Cheddar Gorge. Many of the riders finished up at the Harp & Crown Inn in Gastard for suitably cooling refreshments, rounding off our audax series in suitable style. Big thanks to Rob Wild for waiting at the pub to check the riders in. 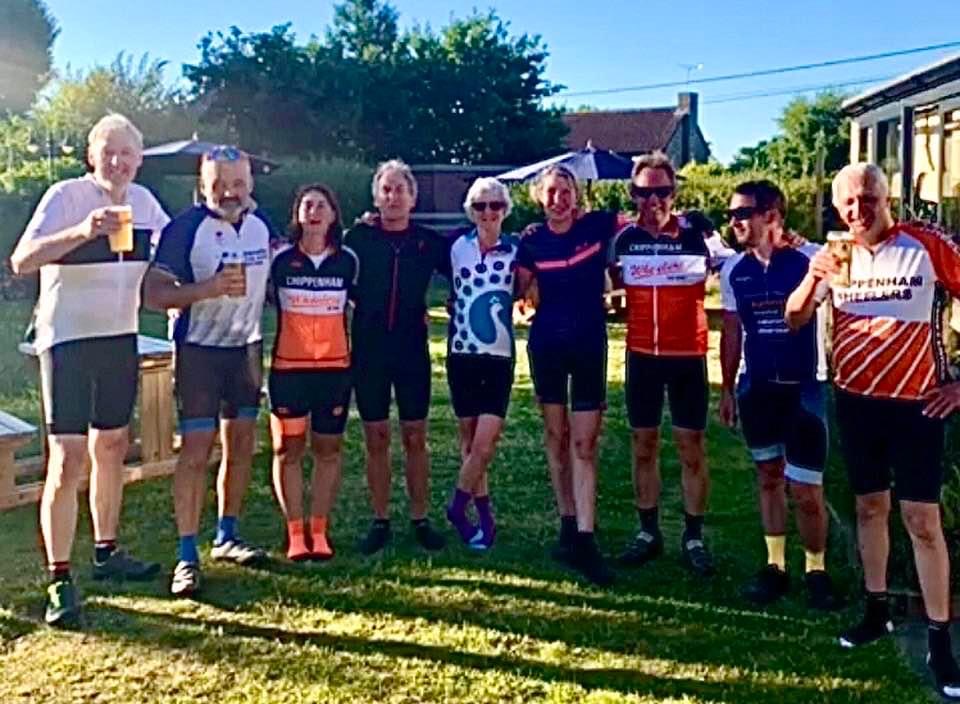 Provisional results for the whole Audax series are in the table on the website – see https://www.chippenhamwheelers.org/audax-series-provisional-results/. Medals are awarded at the club’s annual awards night for total distances ridden. Bronze for more than 350km, Silver for more than 500km and Gold for more than 750km.

Finally, we have Gordon Aitkenhead, Paul Andrews, Steve Blythe, Rich Buckley and James Ecclestone who have all achieved Bronze.

Well done to everyone, we hope you have enjoyed the Audax series and the challenge of riding “just that little bit further”.

“Gravel riding” seems to have become the new big thing in cycling although riding the by-ways and bridleways on bicycles has been going since the bicycle was invented.

A few of us rode out to the Goat Farm near Avebury for coffee and cake, enjoying the trails around Windmill Hill, Cherhill Monument and the super descent through Chittoe. 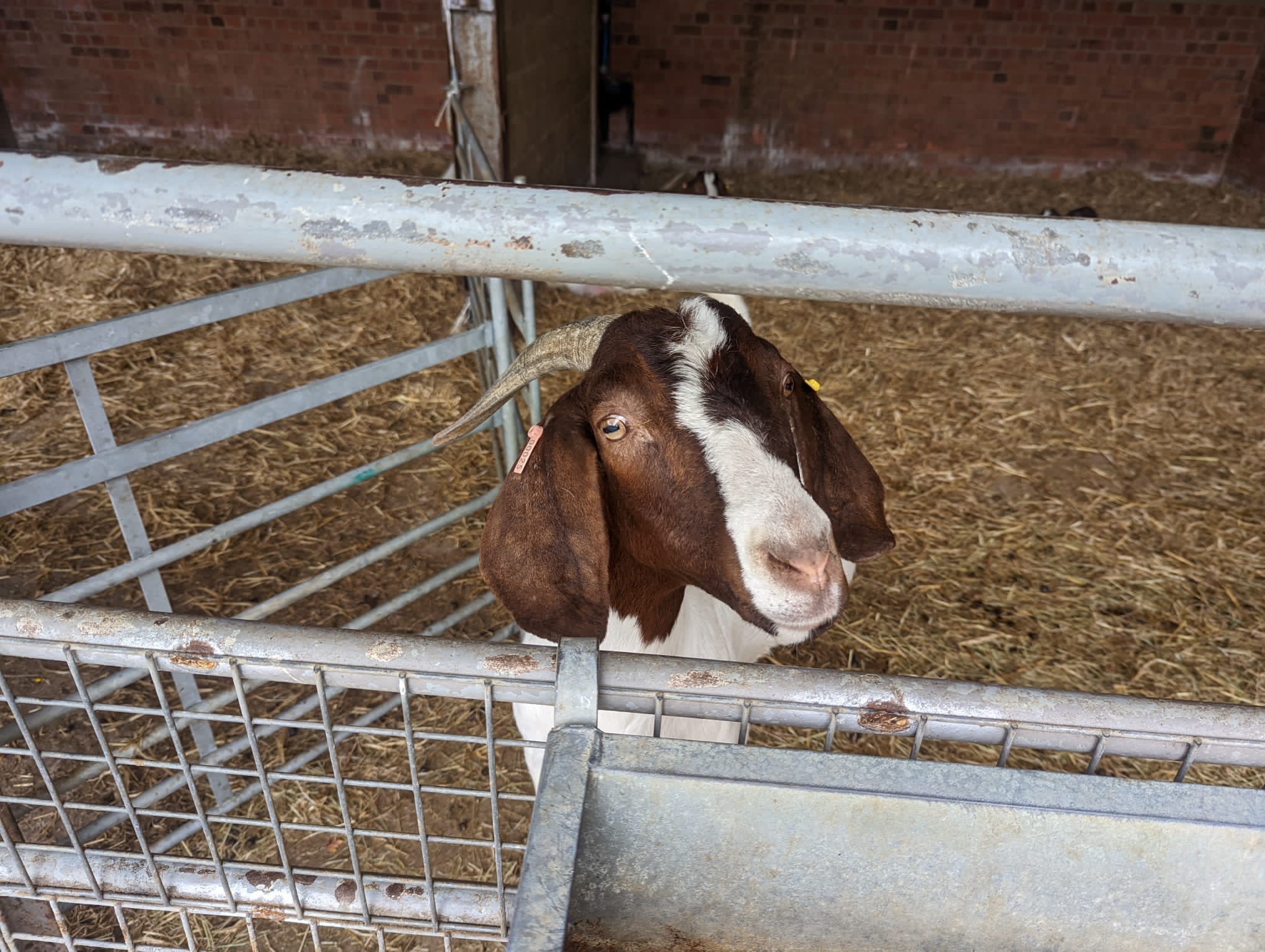 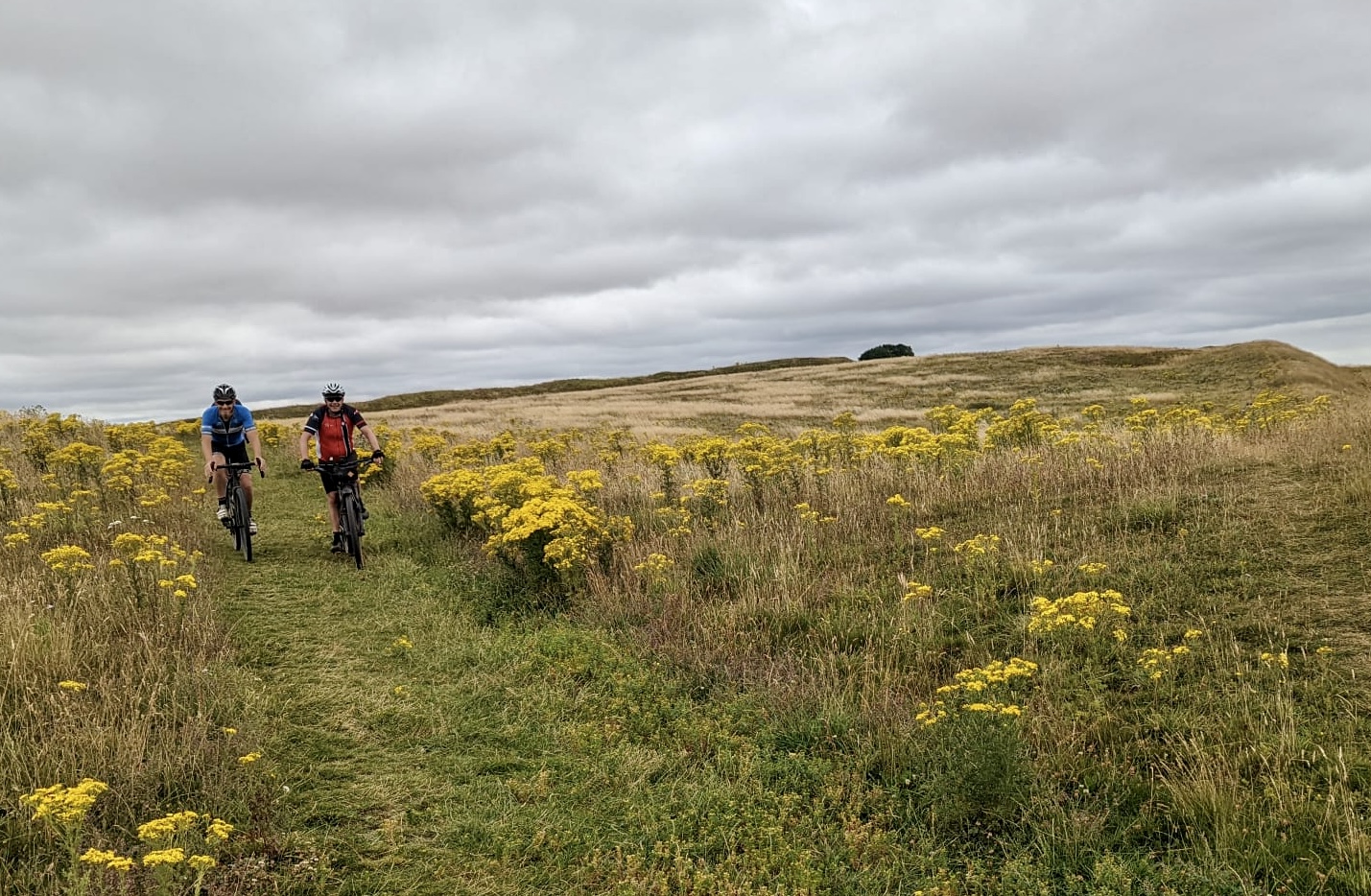 We’re hoping to arrange another off-road trip on bank holiday Monday 29th August. Bring whatever bike you like, gravel, MTB but maybe not a penny farthing! Just make sure it has some suitable gravel tyres. Look out for details on the website nearer the date, when we have finished designing the route.

Well having delayed the event by a week was it worth the wait, well the conditions were cooler than last week, but the headwind was in the most soul-destroying part of the course from Dauntsey to Somerford.

Unfortunately, Matt Chapple was not able to join us having punctured on the way to registration so we did not get to see what difference his new TT bike would have made. Our thanks to Mike Gibbons for marshalling the church/pub turn and as always Mike Edwards for the right turn and Sue for several hours of time keeping.

Considering that Owen and Simon both rode the Welsh 100 on Sunday their times were outstanding, well done both. Congratulations to Simon on winning both the Nixon Cup and the Mike Edwards Handicap Cup.

Having had great weather for the last 4 weeks it was a little depressing to gather in the ride HQ car park in persistent drizzle, all commenting that it had been dry at home. Clearly Cricklade and the A419 have their own weather system.

All those from the club who rode had good times and Theo Anderson absolutely smashed the club junior 10-mile time trial record with a 20:34, breaking Matt Griffin’s 2011 record of 21:41, coming 4th overall into the bargain.

Thanks to David English for the following picture. 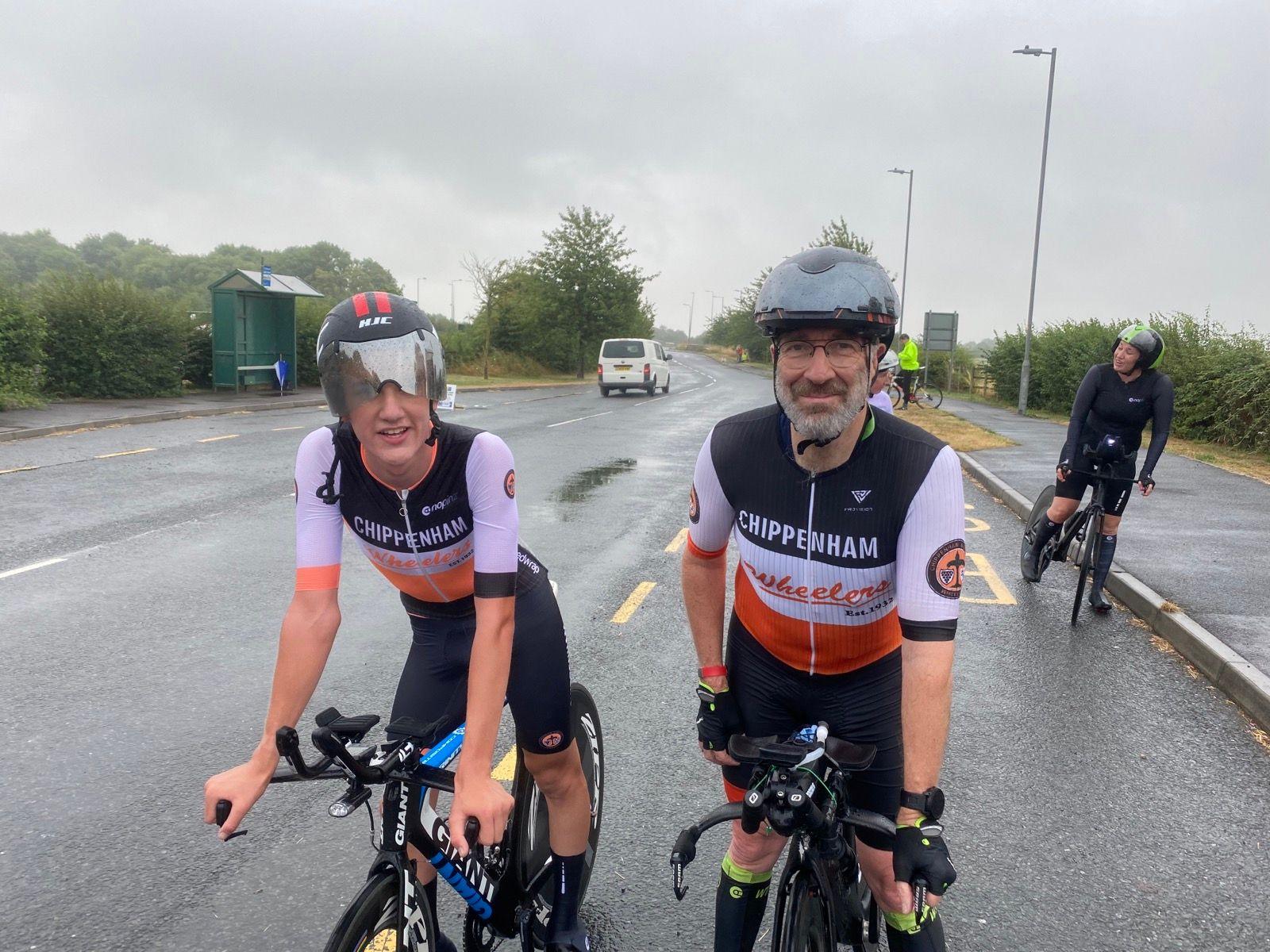 At the moment Owen Burgess leads the BAR competition with an average speed across the 100, 50 and 25 mile distances of 25.96 mph against Paul Winchcombe’s 25.06 mph. Paul leads the VBAR by virtue of being the only veteran with qualifying rides. There are still enough Open events left across the country for other riders to qualify, so get planning!

After several more events, bike changes and course variations there have been changes at the top of the table.

On paper there is all to play for, especially if lead riders do not turn out for the remaining events. Matt and James could both alter the table if they score 10 points on each of their remaining races, of course they cannot each do that but in theory they could easily add 19 points each to their totals. So best the leaders turn out for the remaining races or they could find themselves unseated. 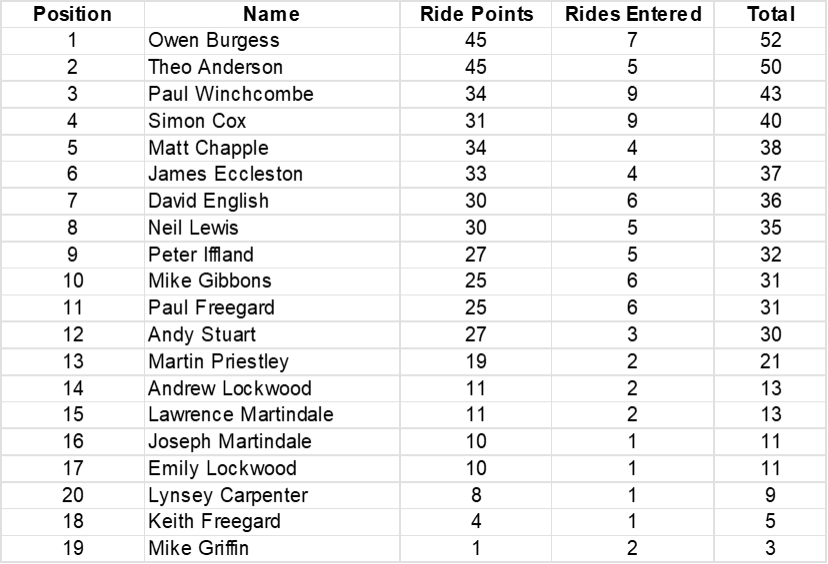 We have 2 Open Events in October which we would be grateful if any members are able to volunteer to help run either of these events:

Andy Cook made a comeback to racing at Round 5 of the PDQ Race Series held at Castle Combe. Hopefully this isn’t a one off and we see Andy compete on a regular basis.

Lawrence Martindale won the Cat 2/3 race at round 6 of the Odd Down Summer Series against a strong field. Lawrence also won enough points to move from Cat 3 to Cat 2.

Firstly, many congratulations to Theo Anderson who has been selected to represent the South Region in the School Games in September. This is a prestigious, multi-sports event hosted at Loughborough University every 2 years.

Theo continues to compete in the National Youth Circuit Series. This month he competed at the London 2 Day coming 54th on GC despite being involved in a heavy crash on Stage 2 losing over 3 minutes, he bounced back in Stages 3 and 4 by attacking of the front of the peloton and taking some bonus seconds in a prime. Theo also competed in the National Circuit Championships where he came a creditable 36th having broken a cleat on the first lap on a very tough and hilly course. 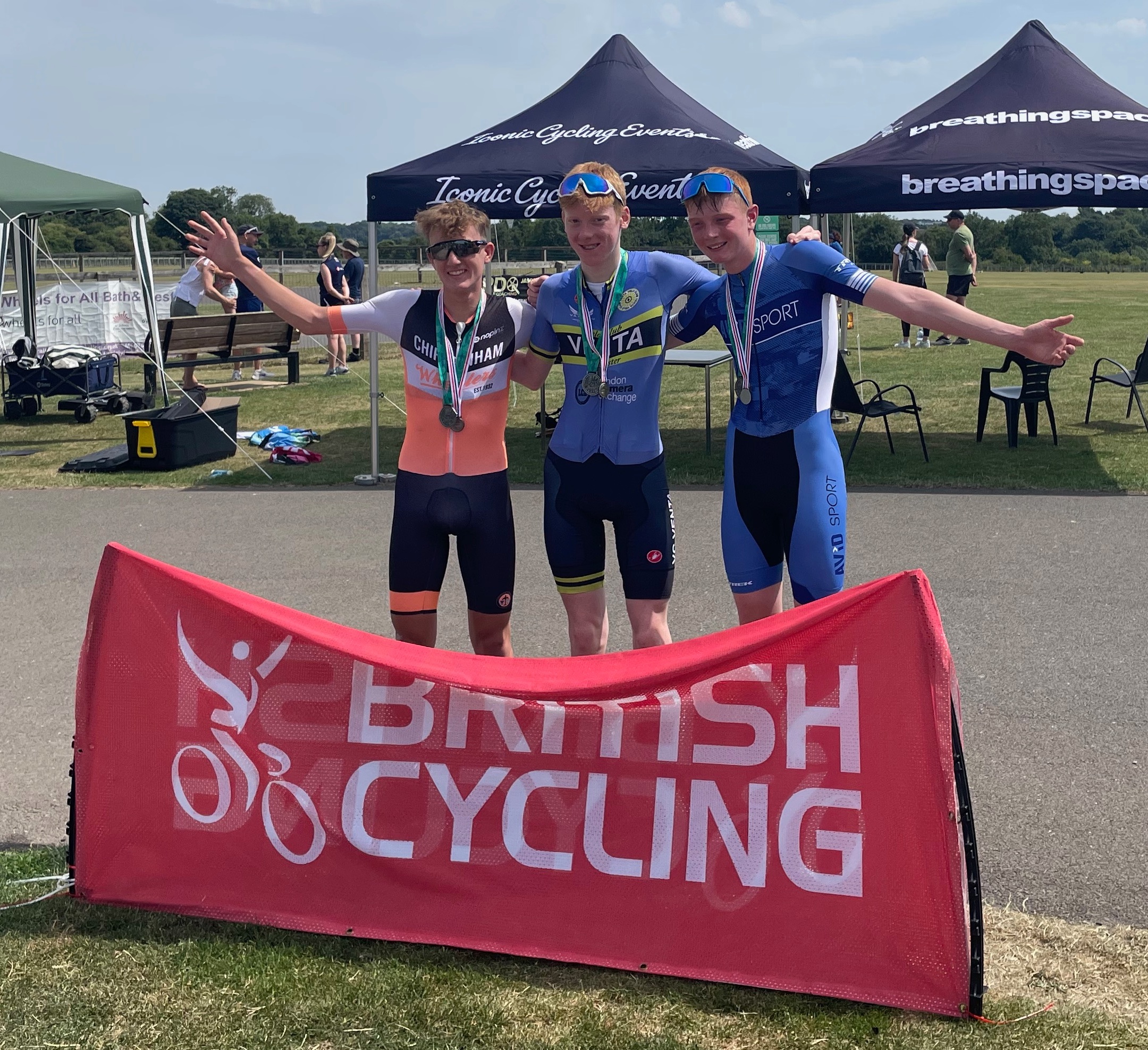 In August, Theo is competing in the 2KM Individual Pursuit and Points race at the National Track Championships at Newport Velodrome. Theo will compete in the last round of the National Youth Circuit Series at the 3 day North West Youth Tour.

Theo moves up to Juniors next year so it would be great to see if we can get some new youth riders racing. If you fancy trying Youth racing but are unsure as to what this entails then please don’t hesitate to speak to either Theo or Stuart Anderson who will be more than happy to answer any questions.

As part of your club membership, you have the use of the facilities at the Chippenham Sports and Social Club. This includes showers for after a ride, skittles alley and a bar.

If you fancy giving track riding a go then the club has a selection of track bikes in various sizes (including youth) you can borrow. We also have a selection of road bikes that can be borrowed also.

The club also has a trailer that can carry up to 8 bikes that can be used for a nominal donation to the club.